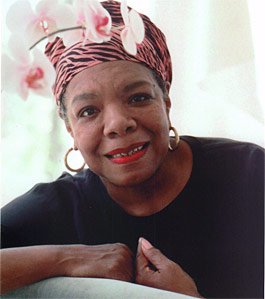 Where my secret lies.

I'm not cute or built

To suit a fashion model's size

But when I start to tell them,

It's in the reach of my arms,

The span of my hips,

The stride of my step,

The curl of my lips.


I walk into a room

Just as cool as you please,

The fellows stand or

Fall down on their knees.

Then they swarm around me,

A hive of honey bees.

It's the fire in my eyes,

And the flash of my teeth,

The swing in my waist,

And the joy in my feet.


Men themselves have wondered

What they see in me.

They try so much

But they can't touch

When I try to show them

They say they still can't see.

It's in the arch of my back,

The sun of my smile,

The ride of my breasts,

The grace of my style.

Just why my head's not bowed.

I don't shout or jump about

Or have to talk real loud.

When you see me passing

It ought to make you proud.

The bend of my hair,

The palm of my hand,

The need of my care,

'Cause I'm a woman

You may write me down in history

With your bitter, twisted lies,

You may trod me in the very dirt


Does my sassiness upset you?

Why are you beset with gloom?

Pumping in my living room.

With the certainty of tides,


Did you want to see me broken?

Weakened by my soulful cries.


Does my haughtiness offend you?

Don't you take it awful hard

Diggin' in my own back yard.


You may shoot me with your words,

You may cut me with your eyes,

You may kill me with your hatefulness,


Does my sexiness upset you?

Does it come as a surprise

At the meeting of my thighs?


Out of the huts of history's shame

Up from a past that's rooted in pain

Welling and swelling I bear in the tide.

Leaving behind nights of terror and fear

Into a daybreak that's wondrously clear

Bringing the gifts that my ancestors gave,

I am the dream and the hope of the slave.

Maya Angelou born Marguerite Ann Johnson on April 4, 1928) is an American autobiographer and poet who has been called "America's most visible black female autobiographer" by scholar Joanne M. Braxton. She is best known for her series of six autobiographical volumes, which focus on her childhood and early adulthood experiences. The first, best-known, and most highly acclaimed, I Know Why the Caged Bird Sings (1969), focuses on the first seventeen years of her life, brought her international recognition, and was nominated for a National Book Award. Angelou has been highly honored for her body of work, including being awarded over 30 honorary degrees and the nomination of a Pulitzer Prize for her 1971 volume of poetry, Just Give Me a Cool Drink of Water 'Fore I Diiie.

Angelou was a member of the Harlem Writers Guild in the late 1950s, was active in the Civil Rights movement, and served as Northern Coordinator of Dr. Martin Luther King, Jr.'s Southern Christian Leadership Conference. Since 1991, Angelou has taught at Wake Forest University in Winston-Salem, North Carolina, as recipient of the first lifetime Reynolds Professorship of American Studies. Since the 1990s she has made around eighty appearances a year on the lecture circuit. In 1993, she recited her poem "On the Pulse of Morning" at President Bill Clinton's inauguration, the first poet to make an inaugural recitation since Robert Frost at John F. Kennedy's inauguration in 1961. In 1995, she was recognized for having the longest-running record (two years) on The New York Times Paperback Nonfiction Bestseller List.

With the publication of I Know Why the Caged Bird Sings, Angelou was heralded as a new kind of memoirist, one of the first African American women who was able to publicly discuss her personal life. She became recognized and highly respected as a spokesperson for black people and women. Angelou's work is often characterized as autobiographical fiction. Angelou has, however, made a deliberate attempt through her work to challenge the common structure of the autobiography by critiquing, changing, and expanding the genre. Her books, centered on themes such as identity, family, and racism, are often used as set texts in schools and universities internationally. Some of her more controversial work has been challenged or banned in US schools and libraries.