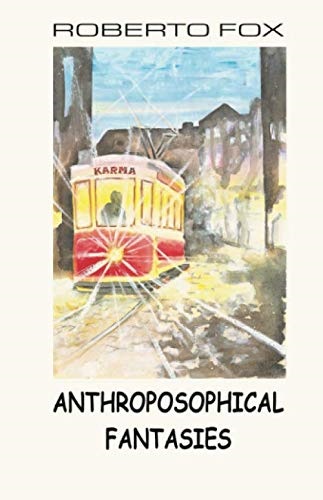 Anthroposophy, also known as Spiritual Science, is not known for fantastic literature, or for fiction of any kind. So how can stories with titles like Life on Mars or The Girl in the Floppy Hat, To Hunt a Nazi or The Occult Inquisitor qualify as anthroposophical. They do not … until now.

Therefore this book is groundbreaking.

You may smile at times, even laugh; other stories may cause a lump in your throat, perhaps even a tear or two.

The beginning of the cover story, A Streetcar Named Karma, describes how a young German officer ready to fight for his country during the First World War meets a Czech girl in a Prague streetcar. The meeting appears to be accidental, caused by the couple being knocked over the the streetcar's traffic antics.

They go together to a lecture that evening by an charismatic Austrian named Rudolf Steiner, who turns out to be a truly fascinating personality who speaks convincingly and reassuringly about such things as reincarnation and karma.

Their affair is a three-day stand, for the officer goes off the war and....but enough, I can't give everything away, except to mention that their second meeting – after reincarnation – is on a San Francisco cable car.

Oh, and by the way, fundamentalists are advised not to partake of this fantastical frosting on their anthroposophical cake.

If spiritually prepared, you can get the book here: Anthroposophical Fantasies.