A stunningly beautiful painting called Mary Magdalene which the world-class art historian suspects may have been painted by Leonardo da Vinci together with one of his pupils will soon go on public view for the first time in more than half a century. 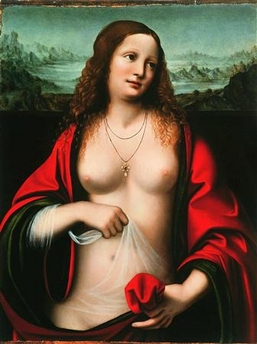 The painting, measuring 58 cm by 45 cm, was believed to have been painted in 1515, four years before the master died.

It goes on display in October in the Adriatic port of Ancona and depicts Magdalene bare breasted, wearing a red robe and holding a transparent veil over her belly.

It has been attributed to Giampietrino, a Leonardo pupil whose work can be found in some of the world's greatest museums, including Leningrad's Hermitage and London's National Gallery.

But Pedretti, director of the Armand Hammer Center for Leonardo Studies at the University of California at Los Angeles, suspects it may be much more.

"Because of the very high quality, I am inclined to believe that it is much more than a supervision of the student by the master," he told Reuters in a telephone interview from his part-time home in Tuscany.

"I can't say for sure yet, but this is my position and I am prepared to follow up with the whole process of laboratory verification and the rest of it," the 77-year-old professor said, speaking in English.

Pedretti, co-curator of the exhibition of works by Giampietrino and others, said the work "has the character of a Giampietrino painting but is far beyond his qualities."

The painting has been in private collections for nearly all its recorded history in the past 100 years or so.

A black-and-white photo of it was taken in the 1920s in Vienna. It was last exhibited briefly in the United States in 1949 and Pedretti recently tracked it down to a private collector in Switzerland.

Pedretti, who has devoted most of his life to studying Leonardo, is cautious but hopeful that his hunch will prove correct.

He wants the painting to undergo an infrared reflectogram, a technique for viewing the under drawings and various paint stages of a painting using cameras equipped with infrared-sensitive detectors.

Pedretti said if traces of sketches were found it would be "extremely important" because Leonardo sketches are very easy to identify.

"First of all, it still has to be examined in a laboratory. I want to see a reflectogram and other examinations. But one extraordinary thing is that it is painted on an intact wood panel, just like the Mona Lisa," he said.

The exhibition is called "Leonardo - Genius and Vision in the Marche Region," after the area of Italy where it will be held and which is home to the city of Urbino, where Leonardo worked in briefly in 1502.

Its co-sponsors include the Italian Culture Ministry and a Vatican foundation.

Leonardo is known to have collaborated with students to complete some of his works. For example, one copy of "Virgin of the Rocks" is believed to have been painted jointly by Leonardo and Ambrogio De Predis.

If the Magadalene painting turns out to be of Leonardo's hand, even if only partially, it would be only one of a few by the master of a nude woman. Another is "Leda and the Swan."

Pedretti said he had no personal agenda to suggest that Leonardo may have had a major role in the painting.

"I don't think I need to draw attention to myself at my age. I'm just proposing this possibility in the service of scholarship," he said.