Translated from the Swedish by Reg Keeland

The English title of Volume I is “The Girl with the Dragon Tattoo”. Does that make you want to buy the book? Tastes differ, but I wouldn’t have paid two cents for it and probably wouldn’t have read as a present. Except that in this case the giver was my literature-loving daughter, who lives in Germany and took the trouble of sending it to me from there. Confronted by a 650 page paperback I frowned, shrugged, read the first chapter and was hooked. I later learned that the original title in Swedish is “Men who Hate Women”. Why certain publishers insist on changing titles from good to bad to worse is one of literary life’s mysteries. The second volume’s English Title is “The Girl Who played with Fire”. Who knows what the third volume’s title will be. In German it’s “Vergebung” (Forgiveness) – which also has nothing to do with the Swedish title.  Amazon promises it for October 2009, the Brits for January 2010, and the Swedes are already working on a movie with Swedish actors. I was sort of hoping for George Clooney as Mikael Blomqvist (Kalle Fucking Blomqvist, as Lisbeth calls him), but he doesn’t speak Swedish. The actress pictured above is okay, I guess, but I picture Lisbeth more like this (after she retires): 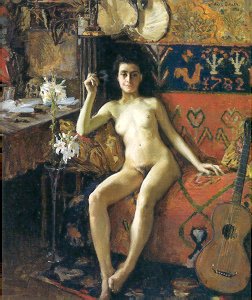 I obtained the second volume in English on my own, but had no intention of waiting till October, let alone next year for volume three, so imposed on my second daughter, also in Germany, to send me the German version, which I devoured whole to the detriment of almost all other activities. Now here I sit with no hope of ever learning more about the most exciting character, Lisbeth Salander, to emerge in crime literature since Cain and Abel. But wait, they were both men, and we are in the twenty-first century, so Lisbeth is the first, the reigning queen of literary crime page-turners. Although there are rumors of an unfinished fourth volume, the sad fact is that Stieg Larsson died at fifty years of age of a heart attack before his opus magnum was published. (Dire rumors of assassination by Swedish fascists have been denied.)

The English publishers had one thing right, though. Despite the complex plot, the plenitude of interesting characters – good, bad and in-between – it’s all about Lisbeth Salander. Although in her mid-twenties, she looks more like fourteen, slight and vulnerable. Abused as a child by her father and her shrink, she clothed herself in a hard, almost impenetrable shell. She is antisocial (You’d love to get to know her, but she’d ignore you and if you insisted, you’d get a kick in the crotch), has a photographic memory, is bisexual and a world class hacker. At first you can’t decide whether to pity or admire her, but the latter soon wins out and eventually rises to love regardless of you sexual orientation.

All she really wants is to be left alone, which is impossible because certain bad guys are seriously out to get her for nefarious things that only she knows about them. Then there is her insatiable thirst for revenge. Also, despite being a misanthrope, she falls for Kalle Fucking Blomqvist, a weakness she denies herself as long as she can. Meanwhile she helps him – or vice versa – destroy ex-Russian spies, corporate criminals and a German monster with a nervous conditions which makes him impervious to pain.

If all this seems unrealistic, especially Lisbeth Salander, stop worrying. She is beyond real, a best selling, mythical Nordic mini-Amazon.