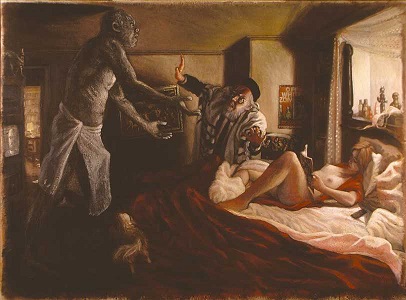 If (as the Greek affirmed in the Cratylus)

the name is archetype of the thing

in the letters of “rose” is the rose

and all the Nile in the word “Nile”.

And, made of consonants and vowels,

there'll be a terrible Name, which

guards in precise letters and syllables

the ciphered essence of God and the Omnipotence.

Adam and the stars knew it

in the garden. The corrosion of sin

(the qabalists say) has erased it,

And the generations have lost it.

The artifices and candor of man

are endless. We know there was a day

when God’s people were seeking the Name

in the solemn vigils of Jewry.

Not in the way of others where an obscure

shadow insinuates in the obscure history,

still young and alive is the memory

of Judah Loew, who was a rabbi in Prague.

Thirsting to know what God knows,

of letters and complex variations

and finally pronounced the Name: the Key,

the Door, the Echo, the Guest and the Palace,

over a doll which with clumsy hands

he carved, to teach it the secrets

of the Letters, of Time and of Space.

The simulacrum lifted its sleepy

lids and saw forms and colors

it did not understand, and lost in sounds

Gradually, it saw itself (as do we)

imprisoned in this sonorous web

of Before, After, Yesterday, Meanwhile, Now,

(The qabalist who presided as numen

these truths are given by Scholem,

in a learned part of his volume.)

The rabbi explained to it the universe

“This is my foot, this is yours, this the rope.”

And after years got the perverse creature

To sweep the synagogue, well or badly.

Perhaps twas an error in penmanship

or in pronouncing the Sacred Name,

for despite such avid enchantment,

the apprentice of man learned not to speak.

Its eyes, less of man than of dog,

and even less of dog than of thing,

followed the rabbi around the pallid

penumbra of the confining rooms.

Something abnormal and gross was in the Golem.

because the Rabbi’s cat at its passing

would hide. (This cat is not in Scholem,

But in the passing of time I divine it.)

Lifting filial hands to its God

it copied its own god's devotions;

or, stupid and smiling, it would bow

The Rabbi observed it with tenderness

and with some horror. “How” (he asked)

“could I beget this sorry son

“Why did I add to the infinite

series another symbol? Why to the vain

skein that winds in the eternal

did I give another cause, an effect, and grief?”

In the hour of anguish and lack of light,

his eyes on his Golem would rest.

Who will tell us the things God felt

when looking at his rabbi in Prague?

Translator's note: Lost in translation. This poem is replete with rhythm and a strict a-b-b-a rhyming pattern. Regrettably, it is impossible to reproduce in translation.