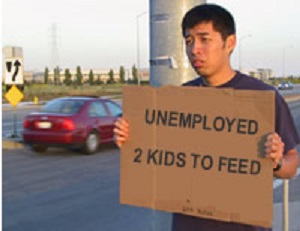 It was back in the late eighties when I worked as an independent Organization Development consultant, and was a member of the International Association for Social Development. The members of IASD meet once a year in different countries. One year the meeting was in Weimar, Germany, where an invited speaker was a Danish woman who was a consultant specializing in firing people. She didn't call it that of course, rather some euphemism, but to us she admitted that's what it was. She recommended to companies who had to fire people, and had a conscience, how to do it in the most humane way possible. You shouldn't simply call the employee with a family into the boss's office, give him two month's pay, say goodbye and sorry. (It had happened to me once, but with two weeks instead of two months pay, so I knew how it feels, kind of, but I was much younger, and had no mouths to feed except my own.)

The consultant described how she recommends that the employee being fired through no fault of his or her own should be given the facts as to why they could not remain in their jobs, but that they could remain in place during the two month “transition” period, so they could look for other employment while still employed, which makes the process easier. Also, there should be someone in the Personnel (aka Human Resources) department who can research and suggest places where the person could try. He or she should also be assisted in preparing a convincing CV. In other words, “we're truly sorry to have to let you go, and we will do all possible to soothe the transition to a new phase in your life”.

Why is that person being fired? The most likely cause is that he/she is being replaced by a machine: a computer program, a robot, something cheaper and more efficient. So to say that as soon as things pick up again we'll be sure to call you is simply not true. Things may pick up indeed, but it will do so thanks to our new platoon of robots, not to your kind, never again.

No, she warned us, unemployment is here to stay and will only get worse in the long run, despite temporary hiccups.

That was thirty years ago. Was she right? Of course. Now we have not only unemployment, but insecure employment based on contractual work without benefits. And technology is on an unstoppable advance. If people don't have work, what can they do? Starve when the food stamps or other palliatives run out? Turn to crime? Well yes. In the United States 40 million people are poor: although a small percentage of the total population, that's still a lot of people. In Argentina, where I live, 40 percent of the population live below that poverty line – and that line is a low bar. And yes, crime is rampant.

The Universal Basic Income (UBI) is a system – or rather the concept of a system, because it has not yet been implemented anywhere – designed to alleviate or at least ameliorate poverty. It automatically provides a fixed income to every adult, rich or poor, working or not. It would replace existing means-based government assistance programs such as unemployment insurance, head-of-family doles, etc. It could even replace social security retirement insurance, a huge chunk of any government's social expenditure. The idea is to guarantee subsistence, and also to encourage enterprise and effort toward improvement – enough to live on, but not to live well.

For some readers who may not yet have heard of the idea of a UBI, please be advised that it is not some screwy idea I happened to think up. No, actually it's been around for quite a while, but has received little attention until now. In fact, just this year (2018) the subject was taken up and voted on by the Swiss parliament, that is, that every resident of Switzerland receive 2,500 Swiss francs per month (quite a large amount). The motion was defeated, but those who presented it were encouraged by the fact that 25% of the votes were in favor. Finland is running a pilot program. It is perhaps ironic that two countries whose people least need it are taking it seriously. There are others: pilots have been run in Canada, The Netherlands, Scotland and Iran. But no decisions, no jumps into the unknown without a parchute.

Many people in Silicon Valley, California's bustling center of technological innovation, are very interested in UBI because their robots and Artificial Intelligence apps are rapidly replacing human work, which is socially objectionable and dangerous for them; and who wants to be the bad guy working for the dark side of technology?

A pilot is being run in a small village in Kenya, financed by Silicon Valley nerds via a nonprofit called Give-Directly. (The village's name is not revealed for fear of thieves.) They give every resident 22 US dollars a month via a mobile app. According to the economic journalist Annie Lawrey, the village had dirt roads, open latrines, no electricity, etc. Now the village is a bubbling pot of enterprise, as residents whose days used to be about survival, save, budget and plan. A woman tells Lawrey: “I'll deal with three things first: the pit latrine I need to construct, the part of my house that has been damaged by termites, and the livestock pen that needs reinforcement so the hyena gets nothing more from me on his prowls.”

Foreign aid, sent to poor countries by rich ones often end up in the pockets of politicians or buying useless items. Some years ago a German charity sent a large number of toilets to rural Brazilians with no running water. Just one example of many.

Cash can go to any use, however, and the user can do what she wants with it. Odds are that she won't buy a toilet if she has no running water.

The Indian government's chief economic adviser claims that 100 US$ per person would reduce the poverty rate dramatically.

In Argentina, where I live, 340 US$ (10,000 pesos at the current exchange rate) would do the same, although no government functionary has even considered the possibility for a country in which 35-40 percent of the population lives below the poverty line. (oops, that was last week. US$340 now represents 13,600 pesos.) Most of Latin America is in similar straits.

The objections to establishing a UBI are, essentially, that people would not bother to work anymore. This might be true for a very small percentage, but the great majority would certainly wish to live above the bare minimum. Another objections is that it would be impossible to finance such a program. In Latin America the way things are now that is true. Brazil and Argentina, for example, have been hotbeds of corruption for decades; but the justice apparatus in both countries has begun to crack down and punish both politicians and business people. In any case, for a UBI plan to work corruption must be eliminated. Paying the UBI to everyone, even to those who don't need it, would go far on the bumpy road to eliminating corruption. The sundry assistance plans currently in place – unemployment insurance, head-of-family hand outs, etc. would be replaced. And how about military expenditures. Sorry, I should say “defense”. The United States actually has 19 intelligence agencies which, according to the results, are not very intelligent. There's plenty of government waste and bureaucracy that could be eliminated everywhere.

People would be free to help others, mothers who receive nothing now for caring for children would find themselves appreciated and more independent. Artists, musicians, poets and educators would flourish, improving society in the process.

Am I promising too much? Perhaps, but I think it could truly be a first step, a baby-step if you will, on a path to a better, humane society.

Oh, and I mentioned the Threefold Society in the title, so some readers will be wondering what that has to do with it. Well, Rudolf Steiner didn't mention a UBI in his extensive writing and speaking on the subject. But he did include something which fits in nicely. He said that human labor is not an object, not part of the supply chain, not an economic factor, but a rights one. That is, that every person has a right to a decent income. So they should receive emolument corresponding to their needs rather than the amount or kind of work performed. That was in 1918. Today, when work has become mechanized, robotized, to the extent that there is not enough to go around, the needs remain. And the idea that companies exist solely to serve the interests of shareholders—rather than also to serve workers, customers, and the larger community—has been dominant in the business world in the past thirty years. If basic needs are not provided, and if that idea is not changed, more and more people will turn to crime as a last resort, or to violent revolution.

The Universal Basic Income does not solve life, but it will enable us to begin working on solutions. In reality we have no choice if disaster is to be avoided.