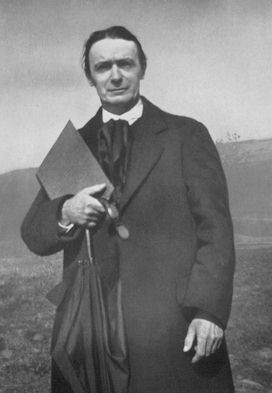 Soul of man!
You live in the limbs
That carry you through the world of space
Into the sea of spirit-being:
Practice spirit remembrance
In the depths of soul,
Where in the reigning
Cosmic creator-being
Your own I
In Godís I
Is begotten;
And you will truly live
In the cosmic human being.

For the Father Spirit of the heights reigns
Creating being in the cosmic depths:
Seraphim, Cherubim, Thrones
Let resound from the heights
What in the depths its echo finds;
This speaks:
Ex deo nascimur.
The elemental spirits
In East, West, North, South hear this:
May men hear it too.

Soul of man!
You live in the heart-lung-beat
That guides you through the rhythm of times
To the sensing of your own soulís being:
Practice spirit contemplation
In equanimity of soul,
Where the surging
Cosmic creative deeds
Unite
Your own I
To the cosmic I;
And you will truly feel
In deeds of the human soul.

For the will of Christ reigns in the earthly sphere
Granting grace to souls in cosmic rhythms:
Kyriotetes, Dynamis, Exusiai
Let from the east inflame
What through the west takes form;
This speaks:
In Christo morimur.
The elemental spirits
In East, West, North, South hear this:
May men hear it too.

Soul of man!
You live in the reposing head
Which opens cosmic thoughts
from eternal founts to you:
Practice spirit-seeing
In peace of mind,
Where the eternal goals of the gods
Confer
The cosmic beingís light
On your own I
For its free will;
And you will truly think
From founts of human spirit.

For the cosmic thoughts of spirit,
light imploring, reign in cosmic being;
Archai, Archangeloi, Angeloi
Let from the depths demand
What will be heard in the heights;
This speaks:
Per spiritum sanctum reviviscimus.
The elemental spirits
In the East, West, North, South hear this:
May men hear it too.

At the turning point of time
The cosmic spirit-light stepped
Into earthly evolution;
Night darkness
Had ended its reign;
The bright light of day
Streamed into human souls;
Light
That warms
The poor shepherd hearts
Light
That enlightens
The wise kingsí heads.

So that good will be
What we
From our hearts beget,
What we
Through our heads
Will to achieve.

Two versions of this meditation exist in the original German ñ a verbal and a printed one. The version translated here is the one recited by Rudolf Steiner on the last day (January 1, 1924) of the Christmas Conference during which the Anthroposophical Society was re-founded in Dornach, Switzerland. The other version, published in the Societyís Newsletter on January 13, 1924, does not mention the spiritual hierarchies, and is entirely in German, as opposed to the Greek and Latin phrases used here. Marie Steiner explained this apparent contradiction as follows:

G¸nther Schubert reports: ìShe [Marie Steiner] spoke recently about her memory of the great difficulty Rudolf Steiner experienced in reaching the decision to publish the verses of the 1923 laying of the Foundation Stone. In the end he toned down the direct approach to the hierarchies by making the salutation more abstract. He wanted this toned-down version to be the one used exclusively within membersí circles too, for he said that there was a law attached to esoteric mantrams of such a cultic nature: The force with which they return is equal to that with which they are sent out, and it is therefore necessary to ask oneself whether one will be strong enough to endure this.î(GA 260, English Ed. 1990 p.283-4).

Now, almost 90 years later, and after both versions have been published in book form, it seems to me that this new translation should not be ìtoned-downî, but made available to everyone who feels strong enough to endure its power.